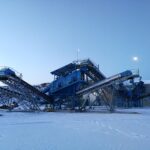 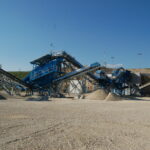 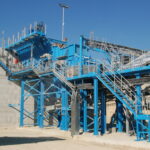 As of April this year, a new stone crushing and sorting line has been in operation at the Rõstla limestone quarry, where Eesti Killustik OÜ produces various aggregate fractions. The newly completed plant is the newest production unit in Eesti Killustik OÜ’s network of quarries. It is also one of the most modern open-pit mining complexes in Estonia, where the high level of automation ensures precise monitoring of the entire production process. Under nominal operating conditions, the line is capable of producing 300 t/h of various aggregate fractions.

In terms of technology, the plant utilises a plate feeder, and fine fractions of the blasted rock are removed by means of a roller screen before the material enters the crushing chamber. The primary crusher is a 200 kW rotor crusher. The crushed material is screened in two stages. To ensure maximum safety, all parts of the line are equipped with walkways.

Apeco’s contract included general project management and consultancy, as well as fabrication and installation of the main conveyors and the belt weigher for the main line. Apeco’s engineers developed the initial concept, and the final design was put together in collaboration with the client, which was then used to select all of the necessary equipment and technology.

The completed project is a major milestone in the development of the production operations of Eesti Killustik. Production is managed using state-of-the-art solutions that allow the possibility for more accurate monitoring and analysis of the production of aggregates. The entire production process is digitally controlled and enables production data to be collected and backed up. The production line is controlled from a separate operator room, where all production activities can be monitored via cameras and computer screens. The hydraulic breaker, too, is controlled by cameras.

Eesti Killustik, formerly known as Põltsamaa Graniit OÜ, is a company with a history of more than 50 years in the extraction of mineral resources and production of building materials. Eesti Killustik OÜ’s two main shareholders are currently the investment company Levalex Invest, owned by entrepreneur Andres Lõhmus, and Ambient Sound Investments through the company Balti Karjäärid OÜ. The company produces over 1,500,000 tonnes of construction aggregates per year.

We have supplied a scrap removal conveyor system to Arras Construction Furniture OÜ.

As of May this year, AS Kunda Nordic Tsement has been operating a new dry-screening complex for screenings.

THANK YOU, YOUR ENQUIRY HAS BEEN SUBMITTED!